Over 3,000 people from the ASEAN region gathered together from March 21–23 for the ASEAN Civil Society Conference and ASEAN Peoples’ Forum (ACSC/APF). The conference in Yangon was the largest ACSC/APF event since its inception in 2005, as well as the largest of its kind in Myanmar’s recent history.

Notable in the proceedings were recognition of enforced disappearances in the ASEAN region, and in particular those of Somchai Neelapaijit and Sombath Somphone. Plenaries on both the opening and closing days included calls for meaningful information regarding Sombath’s abduction and his safe return.

Large-scale investment and development projects, including those in ethnic or indigenous areas, have triggered massive forced displacement and enabled human rights abuses. Civil Society leaders, like Sombath Somphone, who highlight these negative impacts and promoted sustainable participatory development, have been increasingly targeted. We are deeply concerned that the advent of the ASEAN Economic Community will only worsen the situation if it continues with these harmful development policies.

Posters, signs and T-shirts asking for Sombath’s safe return could be seen throughout the conferences proceedings. 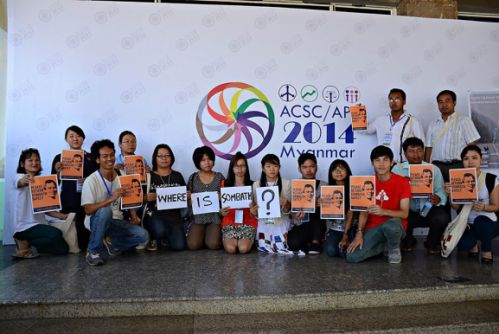