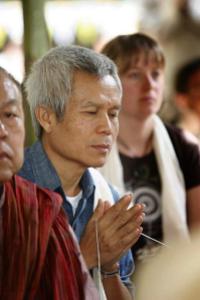 I came to know Sombath Somphone when he was a student in Honolulu, Hawaii. He became friends with several good Americans who were Quakers. The Quakers are members of what is collectively and officially known as The Religious Society of Friends. They dedicate their lives according to religious teachings. Like Buddhists, Quakers place great importance on having kalyanamitta and have confidence in progressive than most Buddhists. They courageously and creatively express their dissent and challenge the government and state in both speech and action.

I understand that Sombath’s Quaker friends influenced him to work for social justice through nonviolence. After the victory of the Communist Party in Laos, many Laotians, especially from the upper-classes, fled the county in waves. But Sombath chose to return to Laos to work in the development of his country. Because he was deft and cautious, Sombath has had a modicum of freedom in pursuing development work. He eventually established the Participatory Development Training Center (PADETC).

PADETC collaborates with many other organizations, including monks. Sombath has maintained good working-relations with state officials at all levels. This is crucial for his work. It has also enabled him to deepen and expand his activities throughout the country. As such, in 2005 Sombath was awarded the Ramon Magsaysay Award for Community Leadership.

Sombath has a good wife. She is a Singaporean who is highly capable and has extensive international experience. She understands well Sombath and the nature of his work. Sombath hs found a true life partner in her. Also, Sombath has good colleagues, especially from the younger generation, Laotians as well has foreigners. He has played an important role in alternative development and education not only in Laos but also in Burma and Bhutan. I have worked with Sombath through the International Network of Engaged Buddhists as well as the Gross National Happiness project. I consider him to be an important kalyanamitta from Laos. We meet regularly. We talk. We travel together. The last time I saw Sombath we were in Burma to discuss work with our Burmese friends. It took place at a restaurant in Mandalay on 10 December 2012. He then returned to Vientiane, and mysteriously disappeared on 15 December 2012.

A trustworthy source in Laos informed me that the Lao state (Communist Party or military) had mistakenly abducted Sombath. They can’t release him now, fearing a loss of face. I was told that Sombath is still alive and is being held at an undisclosed place. The Party had done this before to several members of the Luang Prang royal family. Some  of them were even sent to reeducation camp. At the same time, another source suggested that Sombath was killed on the very first day of his abduction. The murderer was even named in this source. So which version is to be believed?

I believe that many leading figures in the Communist Party and the military are not brutal and that they are still guided by the Dhamma. They will release Sombath (or turn a blind eye to his escape) when they are able to find a good pretext. This will be be good for Laos’s credibility. I am sure that if released Sombath and his wife will not press charges against the Communist Party. They are willing to leave the country and spend the remaining years of their lives in solitude because Sombath has been socially engaged not to gain wealth and fame but out of selflessness and genuine concern about social justice.