Now with 7 billion habitants, we begin to be concerned if we are overshooting the carrying capacity of the earth. The urban population has now overtaken that of the rural. The gaps between the have and have‐not continue to widen. Climate change resulting from industrial pollution is threatening the life‐support system of planet earth. Everyone wants to make more money, and everything is monetized. 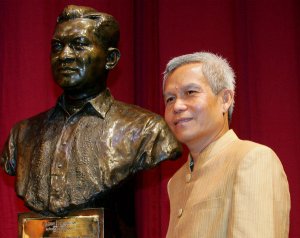 An overview of Sombath’s career–as farmer, scholar, scientist and community developer–can be read at the website of Saoban, a social enterprise that he helped to establish.

An article written about Sombath in 2005 when he received the Magsaysay Award for Community leadership can be read here.

Below is a selection of additional materials either by Sombath or which describe his work.

The Enforced Disappearance of Sombath Somphone: A documentaryVideo released in December, 2018 depicting Sombath’s work and the political context of his disappearance.

30 Years: The Work of Mr. Sombath Somphone. Video released in December, 2014 for the two year mark of Sombath’s disappearance.

Challenges for Poverty Reduction and Sustainable Development – A View from Laos. Keynote speech by Sombath at the Asia-Europe People’s Forum (AEPF9) in Vientiane in October, 2012.

Listening to the People’s Voice. Draft news article article written jointly with Minh H. Pham, Resident Coordinator of the United Nations in Lao PDR in October 2012. The article was withdrawn prior to publication at the request of Minh H. Pham, reportedly because of pressure from Lao authorities.

Teaching Happiness.  An interview with Sombath published in the Bangkok Post on 24 August, 2012.

Community Learning. This film, made by PADETC staff in 2012, shows the impact of Sombath’s development concepts towards participatory problem solving in a village in Xieng Kuang Province.

Happy Laos. In 2012, Sombath helped to make this video.

Bird Toy. This video about the value of indigenous knowledge was produced by Sombath, PADETC, and the Lao Ministry of Education.

Meditation Builds Wisdom towards Sustainable Development. An article by Sombath published in the Vol. 4, No. 7, 2011 issue of the Lao Buddhist Newsletter (Lao Language).

Poverty and Development–a case study of Laos. An audio recording of speech by Sombath at a meeting of International Forum on Globalization, Hawaii, 2011.

Preparing a Generation of Leaders in Laos. A profile of Sombath’s work, included in ‘50 years, 50 stories‘ published by the East-West Centre in 2010.

Interview with Sombath Somphone: A series of video clips of an interview conducted by Ore Huiying in August, 2010.

Saving the Planet: It’s Alive! A video about Sombath and PADETC’s work with schools and youth volunteers. Lao language with English subtitles. 2009. Also available in Khmer, Nepali, and Sinhala.

Interdependencies between Education and Sustainable Development: Presentation at the 10th Asia-Pacific Programme of Educational Innovation for Development (APEID) in Bangkok, Thailand, December, 2008

Saving the Planet. An interview with Sombath recorded in 2008 as part of a TV series produced by TVE Asia Pacific (for more info, visit the TVEAP website)

Developing Youth in Leadership for Sustainable Living. An article in Tales of Hope, published by the Asia-Pacific Cultural Centre for UNESCO, 2007.

Ways to Move from Mass Schooling to ESD. 2007 article from UNESCO publication ESD Currents: Changing Perspectives from the Asia-Pacific.

PADETC – ten years in balance. Published in 2006, this is a colourful report on the first decade of the Participatory Development Training Centre, founded by Sombath.

Magsaysay Award for Community Leadership. Citation and Sombath’s response at the Ramon Magsaysay Award Presentation Ceremonies, August 2005, Manila. PADETC made a video about Sombath and his work in preparation for this event: Country Boy Forever

Traditional Weave, New Wave. Video made on the occasion of PADETC’s winning the 2001 ESCAP HRD Award.

Watershed. An interview in the November, 2001 issue of Watershed on The Future of Democracy, Societies and Ecosystems in the Mekong Region