One week before the official Asia-Europe government meeting (ASEM) gathers in Milan, over 400 people from 42 countries in Europe and Asia gathered at the 10th Asia-Europe Peoples forum (AEPF) to present their demands and recommendations.

More than 400 people, representing social movements, organisations and citizens from 42 countries, met from October 10– 12 2014 to discuss five thematic areas that concern citizens across Europe and Asia. As an outcome of the forum,that takes place every two years in Asia or Europe, recommendations will be presented to the governments at the Asia Europe Meeting (ASEM) on climate change, trade and investment policies, social protection, food sovereignty, migration, peace and security.

The forum started with a keynote speech from Shui Meng Ng, whose husband Sombath Somphone was abducted two years ago, shortly after he participated in the AEPF9 in Laos, as co-chair of the National Organizing Committee. Sombath was last seen when he was stopped by a police car and taken away, on September 15th 2012.

“Sombath was optimistic that many of the challenges and crises in Laos, as well as in Asia and Europe, could be tackled through open and frank dialogue and concrete actions between ordinary citizens in partnership with civil society groups and the government. “said Shui Meng Ng.

Paul Emile Dupret, member of the GUE group in the European Parliament, who went to Laos after Sombath’s disappearance on a mission with the EP, talked about the difficult environment they faced when talking to the Lao government and stated that the European left party rejects “….fake socialism – promoting landgrabbing and corruption”.

Malaysian MEP Charles Santiago put on a Sombath t-shirt to express his solidarity on behalf of all ASEAN parliamentarians. “Don’t tell us we have no business making you accountable,” he said.

For two days, the participants of the AEPF engaged in lively debates and discussions about land and ocean grabbing, climate change and zero waste. Bilateral Investment Treaties (BITs) and the trade and investment agreement between the US and the EU (TTIP), which will heavily impact countries in Asia if it will become the model for all future trade agreements, were also widely discussed. 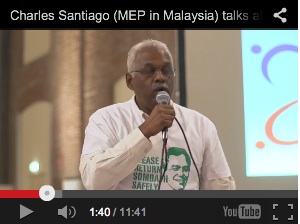 Charles Santiago touched upon the highly controversial Investor-State Dispute Settlement clause in these agreements, which gives companies investing in a country the right to sue governments in supranational laws, bypassing national laws and able to influence policies in the general interest:

Others discussed peace and security and the impacts of international conflicts on people worldwide.

Groups talking about climate change and zero waste policies stressed that the inability of governments worldwide to stick to any commitments made at the official climate negotiations show the need for mobilisation by social movements  and the need for new strategies, linking local movements in Asia and Europe.

The main recommendations for the leaders of the Asian and European countries at the ASEM summit included the following:

After sharing the recommendations at the AEPF, Italy’s Deputy Director for the Countries of Asia at the ministry of foreign affairs Andrea Perugini said he was “..impressed by your commitment and determination” and ASEM official Michael Matthiessen said this outcome clearly showed the importance of the forum.

Mariana Mortuaga, MEP from Portugal, talked in one of the closing speeches about the effects that the EU response on the economic crisis has had on young people across Europe: “This is a hopeless generation. They have learned that the only way to survive is by competing. This has destroyed any form of collective action.”

But the hopeless generation has been able to form alternatives in Southern Europe, she continued, stressing the importance of new parties like Podemos in Spain and Syriza in Greece: “We can fight nationalism by insisting on our international connections. We can fight neoliberalism by working on the local level, and we can fight sense of impotence by creating alternatives and have people experience how it is to be part of a democratic movement. I hope that at the next AEPF in two years we will be stronger and have governments with us in Europe.”

Andy Rutherford from the International Organising committee presented a petition to the ASEM and Italian government officials, signed by almost all participants at the summit, to put pressure on the Lao government to seriously investigate Sombath’s disappearance.

“The leaders in Asia and Europe must sincerely take note of the people’s hopes and aspirations and support the “People’s Vision” to address the world’s development, peace and security challenges.  That would keep Sombath’s vision alive, and that would make Sombath’s personal sacrifice worthwhile,” said Shui Meng Ng.

Rex Varona, from the International Organising committee, ended with saying: “We will continue to organise and build our movements across the oceans.”