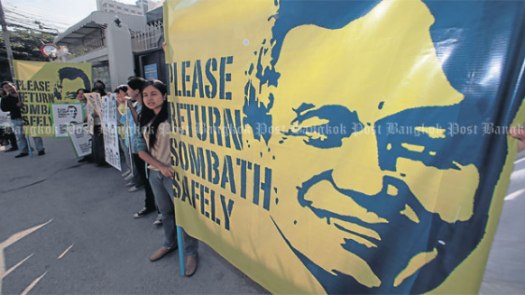 Somphone, a well-known figure involved in rural development, has not been seen since he was arrested by police in the capital Vientiane on Dec, 15, 2012.

A statement from 145 NGOs, under the umbrella of the Sombath Initiative, called on the members of the UN’s Human Rights Council in Geneva “resolutely address” the disappearance.

It added: “Enforced disappearance is a horrible crime, one of a few recognized internationally as unjustifiable under any circumstances.”

Laos is to appear before the council Tuesday.

Angkhana Neelaphaijit, an adviser to the Sombath Initiative, told The Anadolu Agency Tuesday: “The Lao delegation to Geneva says [Sombath’s disappearance] is an internal problem and that Lao authorities are investigating.

“But the CCTV evidence has disappeared and, from what I know, they are not continuing the investigation.”

After footage of Somphone’s arrest at a police checkpoint emerged, Laos refused assistance to enhance the quality of the images and the film has now apparently vanished.

Somphone set up a training center for young people and officials in 1996 and was awarded the prestigious Ramon Magsaysay award, sometimes described as Asia’s Nobel Peace Prize,  in 2005 for his community leadership.

“When Sombath disappeared, civil society in Laos got very scared,” Neelphaijit said. “Nobody wants to work anymore on human rights issues and even those working on development are very scared.”

The last time Laos was reviewed by the Human Rights Council, in May 2010, the communist government pledged to ensure freedoms of expression, assembly and religion, as well as combating people trafficking.

The Paris-based International Federation of Human Rights said the government has failed to make improvements.

“Six years after its signature, Laos has not yet ratified the international convention for the protection of all persons from enforced disappearance,” the Federation said in a statement.

“In addition, the government has failed to adequately investigate most cases of enforced disappearances.”

An investigation by The Anadolu Agency has documented at least 33 enforced disappearances in Laos since 2001.

“Governments should use the opportunity of [a] UN review of Laos to make clear they stand with ordinary citizens against the abuses by unaccountable Lao officials.”