Bangkok (AFP) – An investigation into the disappearance of Laotian activist Sombath Somphone three years ago is “a farce” and has had a chilling effect on civil society, rights groups said Monday.

Sombath, an award-winning campaigner for sustainable development, vanished from the streets of Vientiane after he was pulled over at a police checkpoint on the evening of December 15, 2012.

CCTV cameras in the Laos capital captured the moment his battered jeep stopped at the checkpoint before he is later seen getting into an unknown vehicle.

His case has cast a dark cloud over civil society in Laos, an impoverished tightly-controlled communist country.

It has also raised the issue of impunity for powerful state and business interests held responsible for routinely killing or “disappearing” activists across the region.

Rights groups accuse local authorities of failing to carry out even the most cursory of investigations and withholding information.

“The official investigation so far has been a farce. It is a bad joke,” Phil Robertson, deputy director of Human Rights Watch Asia, told reporters in Thailand. END_OF_DOCUMENT_TOKEN_TO_BE_REPLACED

A press conference entitled “Three Years On: Demanding Answers for the Enforced Disappearance of Sombath Somphone in Laos” was held at the Foreign Correspondent’s Club in Bangkok, Thailand on Monday, 14 December 2014.

A synthesis of new CCTV footage (above) was shared showing: 1) Sombath’s jeep after he was stopped at a police post, 2) being driven out of town by another person after Sombath was called to the police post, and 3) then returning toward the city centre shortly thereafter. The videos also show the pickup truck that took Sombath away.

Despite claims they are conducting a serious investigation, Lao authorities have shown no interest in reviewing this additional evidence.

A press release be seen here, and video of the conference itself is available here.

Notes on the synthesis video include:

Three years ago, on December 15, Magsaysay award winner and acclaimed community development leader Sombath Somphone was detained at a police checkpoint in Vientiane, Laos, and then disappeared by state authorities. Since then, the Lao police and government authorities have consistently failed to seriously investigate the case, and continue to unpersuasively claim ignorance of Sombath’s whereabouts.

Yet evidence is still being uncovered, and on the 3rd anniversary of his enforced disappearance, new CCTV camera footage — obtained from the area where Sombath was abducted on the day that Sombath vanished into state custody – will be made public.

A panel of speakers will also provide the latest updates on Sombath’s case and the international campaign to demand answers from the Lao PDR government.

One thousand days after civil society leader Sombath Somphone was abducted at a police checkpoint in Vientiane, Lao authorities say they still have no clues about what may have happened to him.

Mr Sombath, a renowned community activist, was last seen on Dec 15, 2012, when he was stopped at a police checkpoint in Laos’ capital city. While his apparent abduction was caught on CCTV camera footage, the probe into the case has stalled.

The video footage shows Mr Sombath being stopped at the police checkpoint and several men forcing him into another vehicle and driving away.

Four days after the activist went missing, a statement from the Lao Ministry of Foreign Affairs acknowledged Mr Sombath was stopped at the checkpoint and his jeep was later driven away by another individual. END_OF_DOCUMENT_TOKEN_TO_BE_REPLACED

Today marks 1,000 days since prominent Lao civil society leader Sombath Somphone “disappeared” at a police checkpoint on a busy street in Vientiane. We, the undersigned organizations, reiterate our call for the Lao government to intensify its efforts to conduct a prompt, impartial, and effective investigation into Sombath’s apparent enforced disappearance, to determine his fate or whereabouts, and to take the necessary measures to bring those responsible to justice.

At the second Universal Periodic Review (UPR) of Laos, held in Geneva on 20 January 2015, 10 states made recommendations to Laos to investigate Sombath’s disappearance. In addition, five states raised questions about the issue.

We are dismayed by the Lao authorities’ failure to provide any specific information on the status and progress of the investigation since 7 June 2013. This failure has occurred despite the government’s claim in June 2015, during the UPR process, that it was “still thoroughly conducting” an investigation into Sombath’s “whereabouts.” It is not enough for Laos to simply assert it is still investigating the case. Laos’ international legal obligations require it to carry out a prompt investigation and to keep Sombath’s family informed on the progress and status of the investigation. END_OF_DOCUMENT_TOKEN_TO_BE_REPLACED

The Lao PDR is scheduled for the second Universal Periodic Review of its human rights record on 20 January 2015. In preparation for this event, many organisations from civil society, the United Nations and the Lao government have submitted reports.

Nearly all of the submissions from stakeholders not subject to Lao government control raise the disappearance of Sombath Somphone, many emphatically. These include:

The United Nations, and specifically the UN Lao Country Report, also raise concerns about Sombath’s disappearance, despite reported pressure from the Lao government to exclude any such reference.

In its report, the Lao government, which has repeatedly claimed it is more concerned than anybody else, ignores the issue entirely. 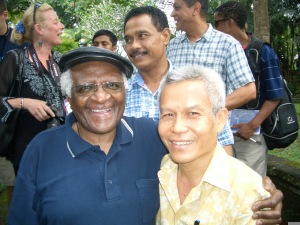 ASEAN member states should abandon their principle of not interfering in each other’s internal affairs and confront Laos on rights abuses in the country as responsible members of the international community, a group of leading regional and international non-governmental organizations said yesterday.

“Instead of invoking the principle of non-interference into one another’s internal affairs, ASEAN member states must act as responsible members of the international community and uphold the…key tenets enshrined in the ASEAN charter, which recognizes the promotion and protection of human rights and fundamental freedoms….,” a statement, signed by 82 regional and international NGOs, said.

The statement was released on the second anniversary of the enforced disappearance of revered Lao civil society leader Sombath Somphone, who was last seen on the evening of December 15, 2012. A police security video of the incident showed Sombath being stopped at a police checkpoint while driving home, before being taken into custody by unknown individuals. Rights groups say the fact that the police officers who witnessed the abduction failed to intervene suggests some level of complicity by Lao authorities. END_OF_DOCUMENT_TOKEN_TO_BE_REPLACED

Lao leading civil rights activist Sombath Somphone, right, with his wife Shui-Meng during a drip to Bali in 2005. Pic: AP.

Two years have passed since the enforced disappearance of Sombath Somphone, a celebrated civil rights worker in Laos. Sombath was last seen being driven away in an unknown vehicle in Vientiane on Dec. 15, 2012. He has not been heard from since. Sombath’s family, friends, and colleagues continue to demand answers about his whereabouts and accountability from a government notorious for strong-arming activists and others seen as “troublemakers”.

CCTV footage shows Sombath was last seen when he was stopped at a police post in Vientiane after leaving dinner with his wife. The video shows him at the post and then being driven away in another vehicle. No one knows his whereabouts since then and the Laos government denies having knowledge about where he is, why he was detained, or what has happened to him. END_OF_DOCUMENT_TOKEN_TO_BE_REPLACED

To mark two years since the enforced disappearance of Sombath Somphone, a press conference was held at the Foreign Correspondents Club in Thailand on December 11th.

The event also included the  launch of the Sombath Initiative, as well as the release of the International Commission of Jurists’ “Missed Opportunities: Recommendations for Investigating the Disappearance of Sombath Somphone.”

Video of the event is available here. Remarks were given by: 1) Angkhana Neelapaijit from the Justice for Peace Foundation, 2) Sam Zarifi from ICJ, 3) Matilda Bogner from OHCHR, and 4) Ng Shui Meng. (11 December 2014)

Two years after the abduction of the prominent, internationally acclaimed Lao development worker Sombath Somphone by Lao state agents, the Lao government has done very little to find the truth, experts say. Meanwhile, the disappearance and lack of justice has effectively created a climate of fear which has worsened the human rights situation in Laos.

“Today marks 726 days, four days short of two years, since Sombath has been taken away from me and my family,” Shui Meng Ng, the wife of Sombath, said at a seminar ‘Sombath Somphone Missing for Two Years’ in Bangkok on Thursday. “Even after the 726 days, the shock, the pain, the anguish have not lessened. In fact, the anxiety has grown with each passing day. Some people sometimes ask me ‘Do you think Sombath is still alive?’ My answer is ‘I can only hope that he is still alive’. Without that hope, I will not have the strength to get up each day”

On 15 December 2012, CCTV at a police checkpoint in Vientiane recorded footage that shows that state agents abducted Sombath at the checkpoint. His car was stopped and then he was escorted into a truck. No one has seen him since. END_OF_DOCUMENT_TOKEN_TO_BE_REPLACED