A European Delegation was in the Lao Capital, Vientiane from the 6th to 9th of March 2013 to express their grave concern that Sombath Somphone, highly respected member of Lao civil society, has still not returned safely to his family. Sombath disappeared on the 15th December 2012, taken away in a truck by unknown persons after being stopped by police in Vientiane. Nobody has seen or heard from him since.

The Delegation formally presented to the Lao National Assembly and the Vice Foreign Minister of the Lao PDR the European Parliament Resolution on ‘Laos: the case of Sombath Somphone’, unanimously adopted on 6th February 2013.

Dutch Senator and Delegation leader Tuur Elzinga stressed that the delegation strongly felt that it was within the capacities of the Lao Government to ensure Sombath’s safe return to his family and that it is therefore essential that appropriate actions are prioritised.

He also stressed that for every day that passes without Sombath’s safe return to his family, the credibility of Laos weakens.

The 8th of March 2012 is the 83rd day since Sombath’s disappearance and for many organisations a 100 days is a time for reflection and taking stock on progress. If no positive result has been achieved a new phase of international activity will inevitably be entered as the European Parliament resolution formally calls on the EU to include Laos and the case of Sombath Somphone in its priorities for forthcoming sessions of the UN Human Rights Council. The year 2012 started a positive year for Laos’ credibility, both nationally and internationally, hosting the ASEM9 Summit and entering the WTO. Unfortunately this credibility is now at stake.

Senator Elzinga: ‘If Lao officials think the issue of Sombath’s disappearance will go away, they are wrong. It will be the first item on any agenda in bi-lateral, multi-lateral and international discussions with and about Laos, until Sombath is safely returned to his family’.

The full report of the delegation is available here.

The Delegation met with

Tuur Elzinga, Senator (for the Socialist Party) in the Dutch Parliament and member of the Parliamentary Assembly of the Council of Europe.

Elzinga was accompanied by Andy Rutherford, a representative of the International Organising Committee of the Asia Europe People’s Forum (AEPF), who had worked closely with Sombath in the preparations for and organising of the AEPF9 that took place in Vientiane between 16th and 19th October 2012 in the weeks before ASEM9. 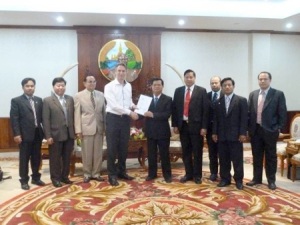 The Resolution of the European Parliament is available here.

Rarely the centre of regional media attention, Laos is more often associated with being “tiny” and “land-locked” but this week the Southeast Asian nation has been forced to perform some diplomatic acrobatics to manage a growing storm around the disappearance of activist Sombath Somphone.

Anyone who lives there will know that a safety net is always recommended when Laos walks the diplomatic tightrope.

Questions around the disappearance of a much-respected activist and campaigner for sustainable development are coming thick and fast since his abduction on a busy street in the Lao capital of Vientiane. But a more unusual sight for locals and observers is watching the Lao Government crunching through their PR gears.

Laos has been earmarked as the next frontier market in Southeast Asia, following in the footsteps of Vietnam and Burma and the abduction of a leading voice in the NGO community has raised new concerns. END_OF_DOCUMENT_TOKEN_TO_BE_REPLACED

Parliamentarians from the three Asean nations of the Philippines, Indonesia and Malaysia visited Laos recently to meet with the relevant sectors on the issue relating to the disappearance of Mr Sombath Somphone last month.

The delegation of parliamentarians was led by Chairperson of the Philippine Parliamentary Committee on Overseas Workers’ Affairs Mr Walden Bello. They met with Minister and Head of the Presidential Office Mr Phongsavath Boupha, who is also chairman of the National Steering Committee on Human Rights in Vientiane on Monday.

The main aim of the visit was to meet with the relevant sectors on the issue regarding the disappearance of Mr Sombath Somphone, with the delegation calling for the Lao government to speed up the investigation process to ensure safety and justice for him and his family. 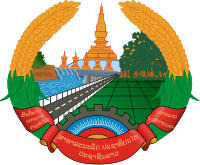 Mr Phongsavath expressed his appreciation of the concerns of the delegation, but said that the Lao government was even more concerned about the issue because Mr So mbath is a Lao citizen, according to a press release issued by the Ministry of Foreign Affairs.

He said Mr Sombath used to study in America but decided to return to Laos in 1980s and played an important role in agricultural development in rural areas of Laos, contributing to the socio-economic development of the country.

Mr Phongsavath further clarified the concerns of the delegation, confirming that the Lao government was not involved in the disappearance of Mr Sombath. END_OF_DOCUMENT_TOKEN_TO_BE_REPLACED

Laos under pressure to step up probe

The Lao government is coming under increased international pressure to step up its promised investigation into the disappearance of a prominent local civic leader, as concerns increase about state involvement in the case.

MPs from other Asean member countries said on Wednesday that Laos’s ruling communist party “clearly had no desire and no political will” to resolve the mystery and urged the government to extend its investigation to the top levels of Laos’s military.

This follows public expressions of concern from the US and other western governments and UN agencies over the case.

The MPs spoke ahead of an expected statement by US secretary of state Hillary Clinton urging Laos to take more action on the case. The three MPs, from the Philippines, Malaysia and Indonesia, visited Vientiane, the Lao capital, where Sombath Somphone went missing on December 15 while driving home one evening from his office. END_OF_DOCUMENT_TOKEN_TO_BE_REPLACED

Statement of Rep. Walden Bello on the Preliminary findings of ASEAN Parliamentary Delegation to the Lao PDR on the disappearance of Sombath Somphone

We are members of a delegation of ASEAN parliamentarians that visited the Lao Peoples’ Democratic Republic to investigate the disappearance of Sombath Somphone, the prominent Lao leader of civil society from January 13 to 15.  We went at the request of the Asia-Europe People’s Forum (AEPF)

The delegation was assembled in 10 days’ time owing to the urgency of the matter.  Despite the short notice, high officials of the Lao PDR met with us, and we are very grateful for this.  We had a very frank exchange of views in a cordial atmosphere.

We told the officials we met with that the disappearance of Sombath is an ASEAN concern because Sombath is an ASEAN figure whose work has touched the lives of many people in Lao and other countries in ASEAN.  His work on rural development was a model emulated throughout the region.  Moreover, at a time when ASEAN is coming together as a real community in the eyes of the world, his disappearance reflects badly not only on Laos but on the whole ASEAN community.

The officials we met acknowledged that the disappearance of Sombath is a blow to the reputation of the Lao PDR and that it could not have come at a worse time, coming on the heels of the country’s joining the World Trade Organization and hosting the Asia-Europe Leaders Meeting (ASEM).  They also all acknowledged that Sombat was an important civil society leader who has contributed much to Laos’ development working alongside government, with many of them saying they knew him personally.  They also noted the special responsibility of the government to solve Mr. Sombath’s disappearance since the Lao PDR has just signed the Convention on the Protection of All Persons from Enforced Disappearance, being the fourth country in Asia to do so.

One of the Lao leaders we met, Mr. Phoungsavath Boupha, President of the National Committee for Human Rights in the Office of the President, acknowledged that Sombath’s disappearance is not the first case of disappearance in Laos.  He cited the case of the sister of the wife of the former ambassador of the Lao PDR to Indonesia who vanished five years ago and has not yet been found.  We stressed to the officials we met that this case shows the importance of acting swiftly to find the disappeared, for the longer he or she is not located, the greater the chances that he will no longer surface.  END_OF_DOCUMENT_TOKEN_TO_BE_REPLACED