The Lao PDR is a people’s democratic state. All powers belong to the people, and are exercised by the people and for the interests of the multi-ethnic people. The State protects the freedoms and democratic rights of the people. All acts of bureaucratism and harassment detrimental to the people’s honor, physical well-being, lives, consciences and property are prohibited.

From the Lao National Report submitted for the Universal Periodic Review held in Geneva on 20 January 2015.

In addition to the numerous recommendations on Sombath’s disappearance made during the Universal Periodic Review for the Lao PDR on January 20th, a number of recommendations were also given regarding civil society:

5.75. Extend, before the end of 2016, a standing invitation to the Special Rapporteur on the promotion and protection of the right to freedom of opinion and expression as well as to the Working Group on Enforced or Involuntary Disappearances (Norway);

5.129. Ensure de jure and de facto protection of fundamental freedoms in order to be in conformity with the ICCPR that has been ratified by Laos. Regarding freedom of expression; lift the restrictions to freedom of press, ensure the independence and pluralism of media, and a safe environment for the work of journalists. Regarding freedom of association; facilitate unhindered action for human rights defenders and NGOs, notably through a reform of their registration system (France);

5.138. Guarantee freedom of expression, the press, assembly and association, as well as freedom of religion and belief in accordance with the International Covenant on Civil and Political Rights (Uruguay);

5.146. Guarantee the effective exercise of freedom of expression, assembly and association by reforming its legislation particularly in order not to undermine the legitimate work of NGOs and human rights defenders (Luxembourg); END_OF_DOCUMENT_TOKEN_TO_BE_REPLACED

Government officials held a news briefing in Vientiane on Friday about the outcome of Laos’ participation in the second cycle of the UN Human Rights Council Periodic Review in Geneva, Switzerland, from January 20-23.

Minister, Head of the President’s Office, Chairman of the Lao National Steering Committee on Human Rights, Mr Phongsavath Boupha, highlighted the Lao PDR’s achievements in advancing the promotion and protection of human rights in Laos since the first cycle of the review in 2010.

Mr Phongsavath said the achievements made during the past five years enable the Lao multi-ethnic people to enjoy fundamental rights in accordance with the nation’s constitution and laws.

He noted that during the Universal Periodic Review (UPR) meeting, some 74 countries made statements and recommendations, many of which commended the efforts and achievements of the Lao PDR in the promotion and protection of human rights.

During the meeting, the Lao delegation provided further information, explanations and clarification on certain questions and issues of interest that led to a better understanding of the human rights situation in Laos.

The Lao delegation provided information regarding the ongoing investigation into the missing of Mr Sombath Somphone, among other issues raised by some countries. END_OF_DOCUMENT_TOKEN_TO_BE_REPLACED

In his statement at the Universal Periodic Review for the Lao PDR on January 20th, Mr. Phongsavath Boupha, Chairman for the Lao National Steering Committee on Human Rights, asked for suggestions.

The full report is available here.

5.25. Conclude the process of ratification of the ICCPED shortly, and investigate vigorously all cases of enforced disappearances, including the case of civil society activist, Sombath Somphone, and inform the public transparently about the results of such investigation as far as feasible without endangering the investigation, and bring perpetrators to justice (Germany);

5.94.  Carry out without further delay an independent, credible investigation into the unexplained disappearance of a human rights defender, Mr. Sombath Somphone, which occurred on 15 December 2012 in Vientiane (Luxembourg);

5.95.  Carry out a prompt, independent and impartial investigation aimed at determining the fate or whereabouts of Sombath Somphone (Poland);

5.96.  Undertake a thorough investigation, consistent with international practices and standards, into the disappearance of Mr. Sombath Somphone (Portugal);

Soon after Sombath was taken from in front of a police post on 15 December 2012, government statements issued in the KPL Lao News Agency and by Yong Chanthlangsy, Permanent Representative of the Lao PDR to the UN in Geneva in the Vientiane Times, clearly indicate that it was Sombath in the CCTV footage.

However, subsequent reports on behalf of the investigating committee by Phengsavanh Thipphavongxay, Deputy Director General, General Police Department in the Vientiane Times, allege the persons in the recording could not be identified.

This new interpretation was taken further by Phoumma Khammanichanh, the Lao Ambassador to Australia, in a letter to John Hogg, President of the Australian Senate, claiming the CCTV “…did not give any clear picture of who or what is what therein… Particularly Mr. Sombath himself could not be precisely identified. Therefore, many people can not but keep wondering if Mr. Sombath did actually disappear in the place captured by the CCTV.”

But Phongsavath Boupha, Chairman for the Lao National Steering Committee on Human Rights, again changes course in his statement at the Universal Periodic Review about Sombath’s disappearance on January 20th. Addressing accusations the Lao government might have been involved, Mr. Boupha asserts:

“…these accusations can be refuted by referring to the mere fact that the incident happened in front of a police CCTV camera, and the police authorities, based on their duties under the law, cooperate sincerely with his wife and relatives, allowed them to view and record the CCTV footage.”

If the CCTV footage is not clear enough to identity Sombath or his disappearance (as claimed by the investigative committee and Ambassador Khammanichanh) how can that same footage refute accusations that authorities may have been involved in the incident?

Also, if the police were conducting “…their duties under the law…” when allowing relatives to view the CCTV, why have they denied any subsequent access, and are still refusing to release the original file? 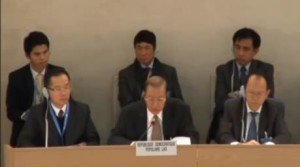 In his recent remarks at the Universal Periodic Review, Phongsavath Boupha, the Chairman for the Lao National Steering Committee on Human Rights, said:

“…the investigation committee has always been open to views and suggestions, and is ready too receive suggestions from any interested parties…”

If authorities are sincerely seeking suggestions, they might begin with these from Canada, the European Union, the United States, and UN Special Rapporteurs made last month on the two-year mark since Sombath’s disappearance.

On this same occasion, suggestions were also made by Amnesty International, the Magsaysay Foundation, the Center for Strategic and International Studies, and 82 International Rights Groups.

In addition, the International Commission of Jurists released a report with specific suggestions through which Lao authorities might “…fulfill their obligations under international law.”

More recently, a number of suggestions were offered by Human Rights Watch and the International Federation for Human Rights.

Scores of additional appeals, statements and suggestions from the above and many other concerned governments, organisations  and individuals can be found here.

More comments and recommendations have been made during the Universal Periodic Review itself. If Lao authorities are truly “…ready too receive suggestions from any interested parties…”, will they work to ensure these are included in the Outcome Report?

Finally, Mr. Boupha suggests that Lao authorities “…cooperated sincerely with [Sombath’s] wife and relatives, allowed them to view and record the footage.”

What better way to demonstrate their sincerity and seriousness than to simply release the original recording, a suggestion that has been made dozens of times?

The Lao government’s response at a United Nations human rights review to concerns over its efforts to find a missing prominent civil society leader demonstrates the need for authorities to accept international assistance and establish an independent commission to investigate his case, his wife said Tuesday.

Ng Shui-Meng, the wife of Sombath Somphone, said a delegation from Laos offered no new information about her husband more than two years after his disappearance while speaking about his case during a Universal Periodic Review (UPR) at the United Nations Human Rights Council (UNHCR) in Geneva, Switzerland.

“[The Lao government] continues to state that the investigation is continuing, but it has been over two years and there has been no progress,” she told RFA’s Lao Service following the UPR, which involves a comprehensive review of the human rights record of all U.N. member countries every four years. END_OF_DOCUMENT_TOKEN_TO_BE_REPLACED

Somphone, a well-known figure involved in rural development, has not been seen since he was arrested by police in the capital Vientiane on Dec, 15, 2012.

A statement from 145 NGOs, under the umbrella of the Sombath Initiative, called on the members of the UN’s Human Rights Council in Geneva “resolutely address” the disappearance.

It added: “Enforced disappearance is a horrible crime, one of a few recognized internationally as unjustifiable under any circumstances.”

Laos is to appear before the council Tuesday.

Angkhana Neelaphaijit, an adviser to the Sombath Initiative, told The Anadolu Agency Tuesday: “The Lao delegation to Geneva says [Sombath’s disappearance] is an internal problem and that Lao authorities are investigating.

“But the CCTV evidence has disappeared and, from what I know, they are not continuing the investigation.”

After footage of Somphone’s arrest at a police checkpoint emerged, Laos refused assistance to enhance the quality of the images and the film has now apparently vanished. END_OF_DOCUMENT_TOKEN_TO_BE_REPLACED

We, the undersigned, request you to resolutely address the disappearance of Sombath Somphone at the upcoming Universal Periodic Review for the Lao PDR on January 20, 2015.

Enforced disappearance is a horrible crime, one of a few internationally recognized as unjustifiable under any circumstances.[1]

Sombath Somphone is widely known for a lifetime of innovative work and remarkable achievements in sustainable agriculture, community and alternative development, public participation, and youth education. He has received accolades from many sources, including the Ramon Magsaysay Award for Community Leadership in 2005.

It is because of this recognition and respect that his disappearance has brought such a significant and sustained outpouring of concern from across the globe.[2] END_OF_DOCUMENT_TOKEN_TO_BE_REPLACED

The government of Laos should use the United Nations Human Rights Council review of its record to pledge concrete measures to address its pervasive human rights problems.

Laos will appear for the country’s second Universal Periodic Review on January 20, 2015, at the UN Human Rights Council in Geneva.

In a June 2014 submission to the council, Human Rights Watch raised concerns about the enforced disappearance of civil society leader Sombath Somphone, severe restrictions on fundamental freedoms to expression and assembly, the denial of labor rights, and abusive drug detention centers.

“The lack of progress in the disappearance of a leading activist is sadly emblematic of the Lao government’s failure take action on a wide range of serious human rights problems,” said Philippe Dam, acting Geneva advocacy director at Human Rights Watch. “UN member countries should make clear their dissatisfaction with Laos’ inaction and insist upon genuine reform.” END_OF_DOCUMENT_TOKEN_TO_BE_REPLACED