A European parliamentary delegation says the Lao government has yet again failed to offer a credible explanation as to the whereabouts of a well-known rights activist.

It’s almost 11 months ago since the disappearance of the internationally-recognised development worker and teacher, Sombath Somphone.

And for the second time this year, a European delegation has visited Laos to press authorities on the case of the missing activist, but they say little progress has been made.

MADDOCKS: In August, a European parliamentary delegation drew the conclusion that Lao authorities were “still in a state of denial” about the disappearance of Sombath Somphone.

The delegation was led by Danish member of parliament Soren Sondergaard.

SONDERGAARD: Our key message was that it is impossible in a country like theirs to accept that a person can disappear a few metres in front of a police control station, taken on camera, everything is taken on camera, and despite of that, eight months have gone without any result in the investigation. END_OF_DOCUMENT_TOKEN_TO_BE_REPLACED 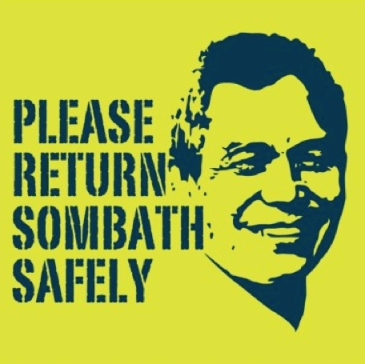 Imagine a man thinking and discussing about development in his country — many people know him, a regular person like you and me.

Imagine he organises civil society meetings which are transparent and non-controversial, open to everyone – including his own government.

Imagine that he is stopped one night ten months ago at a police post and never reappears.

Imagine that the last images of him getting out of his car are caught on closed circuit TV and shown to his family – but that this original footage is never released for analysis.

Imagine European parliamentarians and others in the EU openly and repeatedly calling for this man’s return—but receiving no answer.

Imagine how other human rights activists in his country feel when they see this happening.

And imagine that this country will apply for a seat on the UN Human Rights Council in the near future.

The country is Laos, and the man is Sombath Somphone.

A number of international groups have called on European parliamentarians visiting Laos to maintain pressure to secure the release of Sombath Somphone. In part, the letter reads:

In line with the EU’s commitments to promote human rights through all its external actions, we call on you during your upcoming EP delegation visit to urge the Lao government to:

Until Sombath Somphone is back safely with his family, his case will not be forgotten and calls for his return will persist.

The full letter can be read here.

Today, Thursday, 10 Oct 2013, marks 300 days of the disappearance of Sombath Somphone, one of Lao PDR’s most prominent activists. Sombath is a long-time and good friend. In the late 1970s, he and I were part of a small group of human rights activists and social critics from the Southeast Asian region who met regularly to discuss the situation of our countries (at that time Malaysia, Thailand, Indonesia, the Philippines, Laos, Vietnam and Singapore) and to see how we could support each other in work to advance peace and development in our part of the world.

The outcome of our efforts was a pioneering regional civil society organisation called the Asian Cultural Forum on Development or ACFOD which was set up in 1977. ACFOD’s mission can be seen in the summary below of the organisation’s alternative vision of development which contrasts strongly with the mainstream development thinking prevalent in the region.

Although we were a small regional grouping with limited resources and hardly any support from our national governments, ACFOD’s member organisations, which included the Consumers Association of Penang of which I was the honorary secretary at that time, pushed hard for this alternative vision of development in our national and regional work.

Among our group of 15 hard core members, perhaps no one was more committed to an alternative and decentralised vision of development than Sombath. He founded the Participatory Development Training Centre in Laos in 1997 and became a respected voice in his country against authoritarianism and anti-democratic development, winning the Ramon Magsaysay Award for Community Leadership – one of the most prestigious awards for human development in Asia. END_OF_DOCUMENT_TOKEN_TO_BE_REPLACED 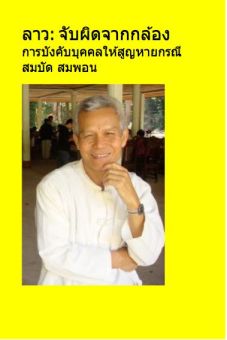 The Amnesty International Report, “Caught on Camera: The Enforced Disappearance of Sombath Somphone” is now available in Thai Language. Please click the picture. 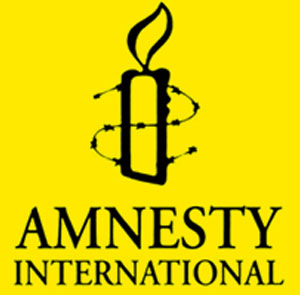 Ahead of International Day of the Victims of Enforced Disappearances on 30 August, Amnesty International calls once more on the Lao government to ensure the safe return of Sombath Somphone. The human rights group calls also on other countries to do more to demand that the civil society leader, a victim of enforced disappearance, is found and returned safely to his family.

Sombath’s disappearance is examined in detail in Amnesty International’s report “Caught on Camera”. He was taken away on the evening of 15 December 2012 in the presence of security personnel at a police post in the Lao capital Vientiane, and has not been heard from since. His disappearance was recorded on closed-circuit television (CCTV) footage that his family was able to copy. The Lao authorities’ likely involvement in Sombath’s disappearance has been compounded by the police’s failure to conduct thorough investigations, which suggests a cover-up. Other countries’ offers of external assistance, including to analyze the original CCTV footage, have been rejected.

Amnesty International has made a series of recommendations to help ensure Sombath’s safe return. But over two months since the human rights group issued its report on his case, it appears that no progress has been made in achieving a positive resolution. END_OF_DOCUMENT_TOKEN_TO_BE_REPLACED

The Lao government must act now to ensure the safe return of civil society leader Sombath Somphone, who is most likely a victim of an enforced disappearance at the hands of the authorities, Amnesty International said in a new briefing issued today.

The briefing, Caught on Camera, examines in detail the case of Sombath, who was taken away in the presence of security personnel on the evening of 15 December 2012 – six months ago – and has not been heard from since.

“Based on the evidence, the most plausible conclusion is that Sombath Somphone is a victim of an enforced disappearance, for which Lao officials are responsible,” said Rupert Abbott, Amnesty International’s Researcher on Cambodia, Laos and Viet Nam.

“The Lao government must publicly demand his immediate and unconditional release, and safe return to his family.” END_OF_DOCUMENT_TOKEN_TO_BE_REPLACED

You can listen to the ABC interview with Amnesty International here, or read the transcript below.

It’s six months since the disappearance of prominent Lao civil society leader, Sombath Somphone. His apparent abduction from outside a police post in the capital, Vientiane, was caught on closed circuit television.

Expressions of concern about his fate have come from across the region, as well as the United States and the European Union.

The Lao authorities say they are continuing to investigate the case, but there’s been no progress to date.

Now it seems further analysis of the CCTV footage has revealed fresh details about just what happened on the evening of the 15th December 2012.

They’re contained in a report from Amnesty International called ‘Caught on camera – the enforced disappearance of Sombath Somphone’.

ABBOTT: Well in our report Caught on Camera, we considered three areas really, we considered the background for Sombath’s disappearance, what happened before that day on the 15th of December. And we found that really there are signals that the authorities were trying to restrict him in society in the run-up to Sombath’s disappearance. Then we’d looked at what happened on the actual day, and you mentioned the CCTV footage of Sombath being stopped at a police post then taken away by a pick-up truck with flashing lights. And in our analysis of that CCTV footage which his family had managed to get a copy of, we have found that there’s also a gunman at the scene, there appears to be a gunshot fired at the scene. And the reason that’s so important is that the police have tried to say that the situation was normal, that there was nothing untoward going on. Now for them to be saying that when there was a gunman at the scene among all the other things that happened, is now appearing absurd. And we’ve also considered the aftermath, the investigations by the police that have been entirely inadequate, these bizarre conclusions that the situation was normal for someone to be stopped a police post and then taken away with a gunman at the scene. And also this rejection of assistance that other countries have been offering, for example to look at the original CCTV footage, do an analysis, find the number plates, try to identify those individuals at the scene. Amnesty International we tried to visit Laos to discuss this case among other things, and we tried to meet with senior Laos officials outside of the country, and our offers to meet have been rejected. But more importantly technical assistance from other countries has been rejected. END_OF_DOCUMENT_TOKEN_TO_BE_REPLACED

The mystery behind the disappearance of respected civil society leader Sombath Somphone in Laos has deepened amid claims by rights group Amnesty International that a gunshot was fired as he was taken away from a police post in a pickup truck by unidentified men six months ago.

Amnesty described it as a “concerning” development which has so far not been mentioned in media reports and statements around Sombath’s disappearance on the night of Dec. 15, when police-recorded surveillance video showed him being stopped at a police post in the Lao capital Vientiane.

Lao authorities have reported little progress on the 60-year-old community worker’s case amid concerns for his safety by fellow activists—some of whom fear that his disappearance could be tied to his human rights work and that he may have been abducted by security groups linked to the government.

The Lao government has turned down international requests to provide any assistance in the investigations, including a U.S. offer to provide technical help to enhance the quality of some blurry images of the vital video footage on Sombath’s last known moments.

Based on Amnesty’s new analysis of the closed circuit television (CCTV) footage, a person riding in the back of a motorcycle ahead of a pickup truck carrying Sombath appeared to fire a shot in the air before speeding away from the police post, Amnesty said in its “Caught on Camera” report.

“The apparent gunshot may have been fired as a warning to witnesses, as a signal for the pickup truck carrying Sombath to leave immediately, or for another reason,” it said.

“The fact that this man is armed may also explain why Sombath did not struggle to avoid being taken away, although those who know Sombath say that he would have tried to discuss the situation peacefully to find a resolution, rather than resist,” the report said. END_OF_DOCUMENT_TOKEN_TO_BE_REPLACED