The Asean Secretariat supports the four-year-old Asean Inter-governmental Commission on Human Rights. The group has actually shown no known concern for the uncounted violations of human rights in the region. The egregious and obvious offence of Mr Sombath’s abduction would be an excellent case for the Asean group to adopt, and press to a decision.

Sombath Somphone was probably the most effective and best-known NGO representative in Laos. One year and one day ago, on his way home for dinner, Mr Sombath was pulled from his car by several unknown men just outside Vientiane. He was bundled into a police vehicle and driven away. He has not been seen since, and his government has not just ignored the case, it has actively worked to cover it up.

A substantial number of concerned Lao and foreign citizens held a vigil at the Laos embassy on Pracha-Uthit Road yesterday. There was no surprise that diplomats showed no interest. That has been the response from all Vientiane ministries and departments since the evening that Mr Sombath failed to show up for dinner with his wife. The grainy closed-circuit TV video showing the actual abduction has roused no concern of any kind from authorities, even though it was a government CCTV camera.

One of the most puzzling facts about the Sombath case is that the victim posed no known threat to the government, the ruling Marxist party or any official. He was 60 when he was taken. He did not take part in, let alone lead, any political group. END_OF_DOCUMENT_TOKEN_TO_BE_REPLACED 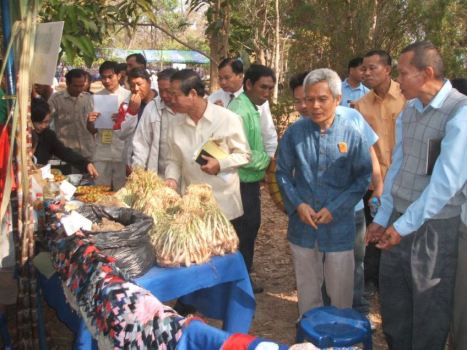 This October marks the 4th anniversary of the founding of the ASEAN Intergovernmental Commission of Human Rights (AICHR). Since AICHR was formed ASEAN has had a mixed track record with human rights. Although there have been some impressive political reforms across the region, particularly in Burma, some states appear to have grown increasingly confident in their ability to commit human rights abuses against their citizens. Nowhere has this been more so than in Laos.

Often presented as an idyllic Buddhist nation, the poor track record of human rights abuses in Laos has largely slipped under the radar of the international media. All this suddenly changed, however, following the enforced disappearance of Mr. Sombath Somphone in late 2012. A recipient of the Ramon Magsaysay Award for Community Leadership – one of the most prestigious awards for human development in Asia, and the founder of the Participatory Development Training Centre (PADETC) in Laos, Sombath Somphone (61) amongst the most widely respected development workers in East Asia. In October 2012 Sombath play a key role in coordinating the Asia-Europe People’s Forum (APF), the largest civil society event ever held in Laos. END_OF_DOCUMENT_TOKEN_TO_BE_REPLACED

By Kearrin Sims and James Arvanitakis

If Australia wants to show leadership within Asia, drawing attention to the disappearance of activist Sombath Somphone is a good place to start, write Kearrin Sims and James Arvanitakis

In February 2013, there was much fanfare when Laos became the 158th member of the World Trade Organisation (WTO). This was a big step for the  country, and the free trade model of economic development was again celebrated as providing a pathway to membership in the global community, improved living standards and a general decline in poverty. However, amidst these celebrations many both within and outside the country were pre-occupied with the disappearance of Sombath Somphone, an internationally recognised Laotian community rights activist. Just who Sombath was and why his disappearance is so important, both as an individual and as a representative of his country, goes to the core of the failings of neoliberalism as a model for development. It highlights that without a conscious effort to improve human rights and equality, economic development will make some very rich while leaving the majority of the population behind. This is not a model for long-term stability. END_OF_DOCUMENT_TOKEN_TO_BE_REPLACED

It’s the mindset of some AICHR members to protect the government rather than the human rights of the people in the region.

Seree Nonthasoot, Thailand’s representative on the Asean Inter-Governmental Commission on Human Rights (AICHR), shares his views on the revision to the terms of reference (ToR) for the agency’s five-year blueprint, and the challenges ahead.

What is the challenge in revising the ToR?

The challenge of the process, which is to begin next year, is how far we can expand the scope of the AICHR’s mandate.

While the revision process is under the Asean foreign ministers’ meeting, we are to provide the ministers with our own input. Indonesia has pledged to host meetings to review the AICHR’s ToR and Singapore and Thailand will join the effort.

Thailand is planning to organise a workshop before the end of 2014 to develop a set of best practices for a regional human rights body and to study how other regions around the world function in this regard.

There are some changes too in our training workshops which formerly targeted only court judges. From now on, we will include public prosecutors, attorneys and police officers. This is to establish common ground on human rights-based investigations and judicial process in Asean. END_OF_DOCUMENT_TOKEN_TO_BE_REPLACED

For the past four years, AICHR has completely ignored violation of human rights in member countries. During the first year of AICHR, attempts were made by individual AICHR member to take up right violations such as the Maguindanao massacre. But it was a non-starter.

Disappearance of Lao activist, Sombath Somphone, in December last year was another case in point showing the AICHR’s lack of moral courage. After all, it came after the announcement of ASEAN Declaration of Human Rights one month before his kidnapping.

The entire article can be read by clicking on the blue links above.

Bangkok/Manila/Jakarta (15 May 2013) – The Asian Forum for Human Rights and Development (FORUM-ASIA), Focus on the Global South, The Asian Federation Against Involuntary Disappearances (AFAD) and the Commission for the Disappeared and Victims of Violence (KontraS) reiterated their call on the ASEAN Intergovernmental Commission on Human Rights (AICHR) and ASEAN governments to break the silence and take action on the disappearance of Laotian development worker, educator and Magsaysay award winner Sombath Somphone. The appeal was made as civil society organizations, respected world leaders and the diplomatic community, friends and family marked the fifth month of Sombath Somphone’s disappearance today.

Despite the recent conclusion of the 22nd ASEAN Summit (25-26 April) and the 12th AICHR Meeting (6-10 May), no concrete headway has been made in addressing or tackling Sombath’s disappearance and human rights abuses in the region. During the 12th AICHR Meeting, the regional human rights body reportedly discussed the implementation of the recently-adopted ASEAN Human Rights Declaration (AHRD), but fell short of taking a position on Sombath’s case, as well as the issue of enforced disappearances in the region. This was despite a recent open letter by the Solidarity for Asian People’s Advocacy – Task Force on ASEAN and Human Rights (SAPA TFAHR), among the many calls from numerous groups and individuals, urging the regional body to do so.

“We deplore the AICHR’s continued silence on the case of Sombath. We understand that the AICHR discussed the AHRD in its latest meeting, but even the AHRD, a document which is below international human rights standards, provides guarantees to the rights to personal liberty and security and prohibits arbitrary deprivation of that right. In this regard, Sombath’s disappearance is an opportunity for the AICHR to act,” said Haris Azhar, Coordinator, KontraS. END_OF_DOCUMENT_TOKEN_TO_BE_REPLACED

Sombath was last seen in December when CCTV footage showed him entering an unidentified SUV at a police checkpoint in Vientiane, The Solidarity for Asian People’s Advocacy Task Force on ASEAN and Human Rights (SAPA TFAHR) said in a letter made available to The Jakarta Post.

“Maintaining a veil of silence is neither constructive nor exemplary of a regional human rights body,” the letter said. “Staying silent on Sombath’s disappearance is a convenient but short-sighted approach, because human rights violations related to land, natural resources and the environment are likely to increase as the region embarks on a zealous pursuit of economic development.”

Separately, rights activist Haris Azhar from the Commission for Missing Persons and Victims of Violence (Kontras) called on the Indonesian representatives on the AICHR to endorse an investigation into Sombath’s disappearance.

“AICHR will turn into useless regional community unless it takes immediate action to search for Sombath,” Haris told the Post on Friday.