Today marks the fifth anniversary of the enforced disappearance of Sombath Somphone, a staunch Lao civil society leader and community development activist who advocated for rural community-based development, especially among the youth. On the fateful evening of December 15, 2012, Sombath was abducted by policemen in Vientiane. Evidence obtained of Sombath’s abduction was caught on CCTV, where it showed that he was stopped and taken away on a pickup truck in front of the police station. Laotian authorities immediately denied any involvement in his abduction, which speaks volumes of the palpable culture of impunity in the country that is felt significantly to this day.

Since Sombath’s disappearance, there has been massive support all over the world for the campaign to resurface him safely. The movement “The Sombath Initiative,” led and represented by his wife Shui Meng Ng, has struggled indefatigably to find truth and justice not only in the case of Sombath, but also in the myriad human rights violations committed by other repressive states. END_OF_DOCUMENT_TOKEN_TO_BE_REPLACED 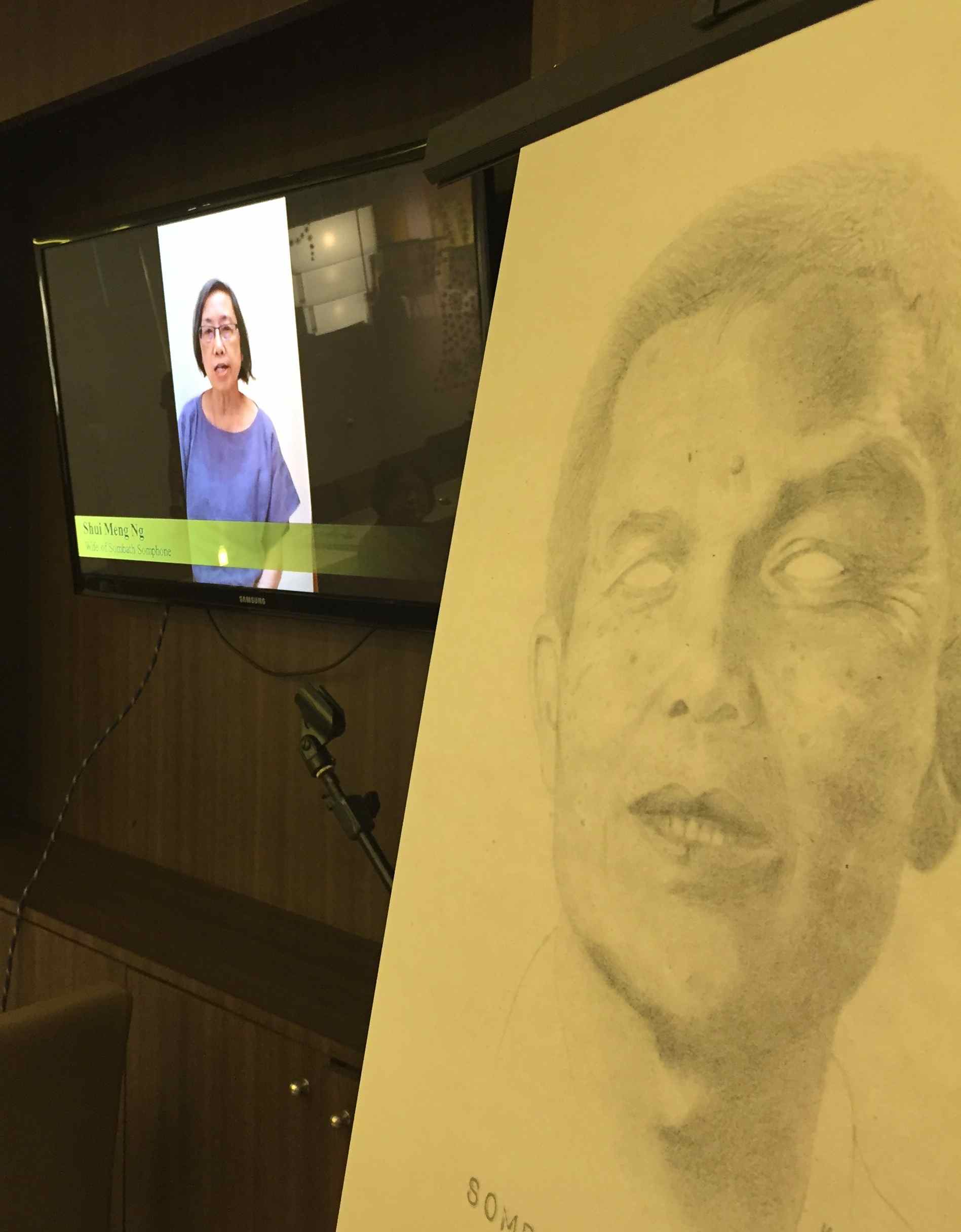 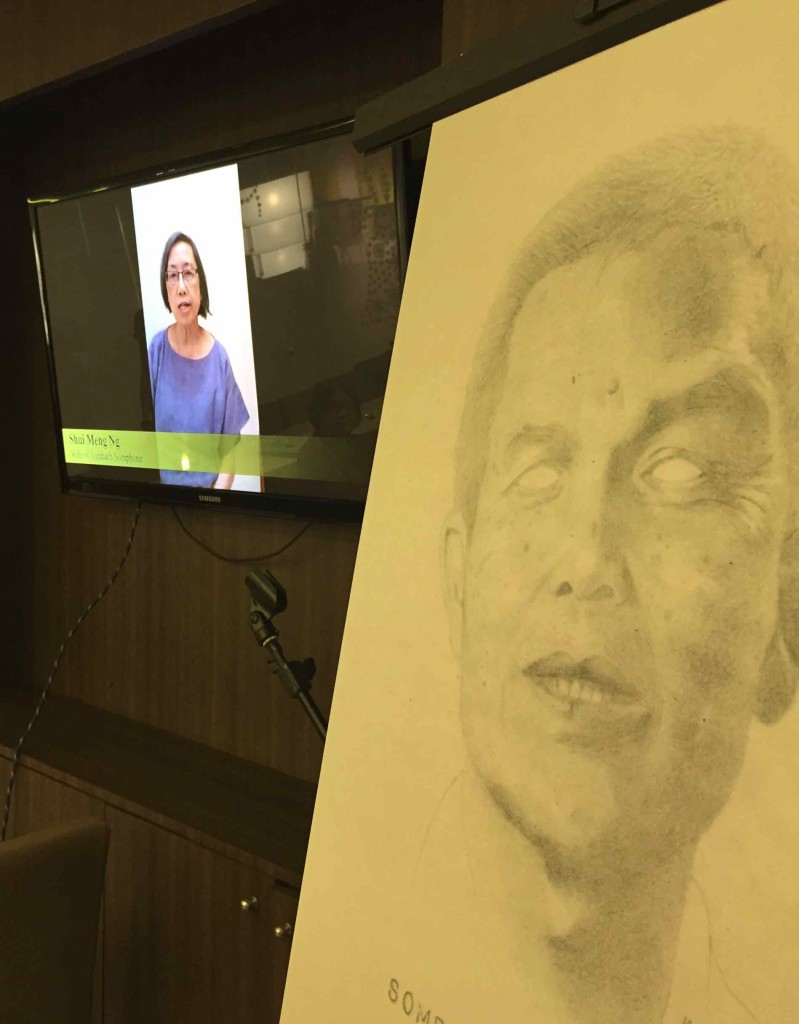 The Asian Federation Against Involuntary Disappearances (AFAD) together with representatives from human rights organizations in the Philippines gathered today, to commemorate the enforced disappearance of Sombath Somphone. Former Commission on Human Rights Chairperson Ms. Etta Rosales who was also present in the event gave an inspirational message to encourage human rights defenders to not lose hope and to continue the struggle for truth and justice. Shui Meng, the wife of Sombath, sent a video message expressing her thanks to AFAD and human rights networks in the Philippines.

Sketches of the Disappeared, including that of Sombath Somphone, were displayed.  “The sketches all have no eyes”, the artist says, “they will have eyes when they reappear”.

The event was also the launching of the ilitaw.ph – the official campaign website regarding enforced disappearances in the Philippines.

Today marks 1,000 days since prominent Lao civil society leader Sombath Somphone “disappeared” at a police checkpoint on a busy street in Vientiane. We, the undersigned organizations, reiterate our call for the Lao government to intensify its efforts to conduct a prompt, impartial, and effective investigation into Sombath’s apparent enforced disappearance, to determine his fate or whereabouts, and to take the necessary measures to bring those responsible to justice.

At the second Universal Periodic Review (UPR) of Laos, held in Geneva on 20 January 2015, 10 states made recommendations to Laos to investigate Sombath’s disappearance. In addition, five states raised questions about the issue.

We are dismayed by the Lao authorities’ failure to provide any specific information on the status and progress of the investigation since 7 June 2013. This failure has occurred despite the government’s claim in June 2015, during the UPR process, that it was “still thoroughly conducting” an investigation into Sombath’s “whereabouts.” It is not enough for Laos to simply assert it is still investigating the case. Laos’ international legal obligations require it to carry out a prompt investigation and to keep Sombath’s family informed on the progress and status of the investigation. END_OF_DOCUMENT_TOKEN_TO_BE_REPLACED

As ASEAN moves toward a single economic community, civil society groups have urged regional governments not to tolerate human rights violations and to address past abuses, including cases of forced disappearance.

In its efforts to become a democratic region, ASEAN still faces unresolved cases of involuntary disappearances. According to the Asian Federation Against Involuntary Disappearances (AFAD), some 800 cases of forced disappearances in ASEAN member countries have been reported to the UN.

The Philippines has the most cases filed at 625, followed by Indonesia with 163, Thailand with 71, Laos and Myanmar with two each and Cambodia with one case.

“The figures represent the tip of the iceberg vis-a-vis the actual number of cases, since families and witnesses are fearful of reprisals from state authorities,” AFAD said in a recent statement. END_OF_DOCUMENT_TOKEN_TO_BE_REPLACED

MANILA – A Filipino mother and a Laotian wife, who have found solace in each other’s company since an encounter in an international forum on desaparecidos, are these days drawing comfort from the United Nations chief’s statement on the International Day of the Disappeared.

For Edita T. Burgos, widow of the world press freedom icon Jose G. Burgos Jr. and mother of missing farmer-activist Jonas, the past eight years since her son was seized while eating lunch at a mall – by men believed to be military agents – have been very difficult.

Shui Meng, wife of Ramon Magsaysay laureate Sombath Somphone, is in town to show her solidarity with other victims of enforced disappearances. She is a guest of the Asian Federation Against Enforced Disappearances (AFAD), where she and Mrs. Burgos met a few months ago.

Sombath is said to have been abducted by Lao government agents, as seen in a video posted on youtube. He remains missing and Shui Meng is pleading with his captors to release him. She expressed hope that the same tragic fate will not befall their family and loved ones. END_OF_DOCUMENT_TOKEN_TO_BE_REPLACED

Surface Sombath: A Forum in Commemoration of the International Day of the Disappeared was organised by the Asian Federation Against Involuntary Disappearances and the Free Jonas Burgos Foundation on 27 August 2015 in Quezon City, the Philippines.

A conference statement in commemoration of the 2015 International Day of the Disappeared was also read.

Laos is a signatory to the main international human rights instruments1 including the Convention for the Protection of All Persons from Enforced Disappearance (ICPED); yet, the practice of enforced disappearances in the Lao PDR is alarming.

…However, Laos has failed to prove that an impartial investigation had been conducted in regards with Mr. Somphone’s abduction. Only vague official statements have been formulated so far… This on-going situation demonstrates the Government of Laos’ lack of willingness to cooperate with the WGEID.

From a General Allegation made by the Asian Federation against Enforced Disappearance to the UN Working Group on Enforced and Involuntary Disappearances.

The Asian Federation Against Involuntary Disappearances and its member organisations arranged actions in support of Sombath on December 15th. Here are a few from Sri Lanka, India and Pakistan:

END_OF_DOCUMENT_TOKEN_TO_BE_REPLACED

Shui Meng Ng, wife of disappeared Ramon Magsaysay awardee Sombath Somphone of Laos, on Thursday urged the government to act on solving disappearances in the Philippines.

Ng was guest speaker at the Third Conference on Psychosocial Support Disappearances, Torture and Extra-judicial Execution held at Bayview Park Hotel in Manila.

Organized by Asian Federation Against Disappearances (AFAD), relatives of the disappeared, among them Editha Burgos, also attended the event. Burgos is the mother of Jonas who was forcibly taken by military agents on April 28, 2007. Jonas has since been missing.

Since martial law in 1972, records show that there were more than 2,000 disappearances, more than 1,000 torture victims and hundreds of killings, including the Maguindanao massacre in November 2009.

Sombath is a prominent civil society leader who received the Ramon Magsaysay Award for community leadership in 2005.On December 15, 2012, Laotian police stopped his vehicle. His abduction was caught by CCTV. He has never been seen since.

Ng and the conference participants called on the Lao government to conduct a serious investigation and do its best to make sure that Sombath will be brought home safe. END_OF_DOCUMENT_TOKEN_TO_BE_REPLACED

‘Let Us Not Forget’ Advocacy Launched

The Association of Major Religious Superiors in the Philippines’ Office of Women and Gender Concerns, together with Focus on the Global South, launched a ‘Let Us Not Forget’ campaign through a solidarity mass at the University of Santo Tomas in Manila on June 30. The Asian Federation Against Involuntary Disappearances participated in the event.

From hereon, the groups will conduct a ritual for remembering every first Saturday of the month to ensure that the campaign for the safe return of Sombath Somphone of Laos and other desaparecidos of Asia continues.

In the mass, officiating Catholic priest of the UST, Father Quirico, reminded those who were gathered that “forgetting about human dignity is a social sin” that serves as “root of evil doings” such as forcibly abducting and disappearing people.