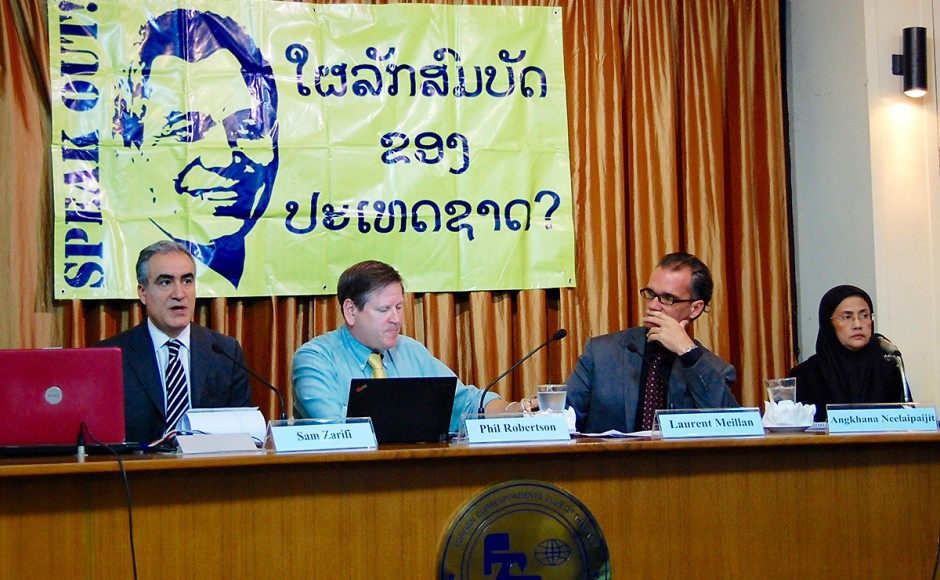 ON the eve of the third anniversary of acclaimed community development leader Sombath Somphone’s forced disappearance, human rights groups on Monday in Bangkok urged the Lao government to provide information regarding Mr. Sombath’s whereabouts and fate.

Sombath was abducted in Vientiane Laos on the evening of December 15, 2012, at a police check-point where he was then transferred to another vehicle according to police surveillance video. At the press conference in Bangkok newly made public CCTV footage, found by Sombath’s family, showed the car further south on the road as the car traveled back into the capital.

A representative from the Sombath Initiative said in a written statement, that the police refused to look at the additional evidence from the family, which, “demonstrates the authorities have absolutely no interest in conducting a serious investigation, as they so often claim.”

According to Sam Zarifi, Regional Director of Asia and Oceania for the International Commission of Jurists (ICJ), at the press conference, “the government [of Laos] has shown no political will to solve the case.” Sombath’s family repeatedly asked the Lao government to check the footage from other CCTV cameras along the road, but to no avail.

Zarifi went on to state that, ICJ believes, “This case is eminently solvable.”

Sombath did not engage actively against the government. He believed deeply in people-centered sustainable development, education and youth development and worked to foster these programs for his country.

In 2005, Sombath was awarded the prestigious Ramon Magsaysay Award for Community Leadership —Asia’s equivalent of the Nobel Prize— for his community mobilization, activism and work in agricultural development in Laos. He himself was raised in a rural village in Laos.

The last time the family heard from the Lao authorities or received any new information from them was almost 3 years ago. Since December 2013, the family and the public have only been told that, “the investigation is still ongoing” according to Laurent Meillan, Deputy Head of Office for the Office of High Commissioner of Human Rights (OHCHR) for Southeast Asia. Meillan went on to say that the enforced disappearance of Sombath has brought about a “culture of fear among NGO workers in Lao”.

The Association of Southeast Asian Nations (ASEAN) member states have remained silent on Sombath’s disappearance. Laos has been appointed the ASEAN Chairmanship for 2016 and should make the Sombath investigation a major goal during the upcoming year.

ASEAN should not invoke the principle of non-interference when it comes to cases of enforced disappearance. ASEAN member states should stand by their commitment to their Human Rights Declaration, which states, “Every person has the right to personal liberty and security. No person shall be subject to arbitrary arrest, search, detention, abduction or any other form of deprivation of liberty.”

Robertson went on to say that the ASEAN People’s Forum in Laos will not go ahead in 2016 because of “lack of funding.” He added that the CSOs refused to censor themselves on issues including Sombath’s enforced disappearance, dams along the Mekong, land rights, ethnic or indigenous people, and LGBT community rights.

“As Laos takes over the chairmanship of ASEAN for 2016, Vientiane’s leaders have become aggressively regressive when it comes to human rights,” he added.

The ASEAN Intergovernmental Commission on Human Rights (AICHR) should urge ASEAN member states, and especially the Lao government, to uphold human rights, stand by CSOs and be a part of the investigation of the enforced disappearance of Sombath.

Meillan of OHCHR went on to say that the absence of progress in the investigation of Sombath casts an “ominous shadow” over Laos’ governments pledge to act.

State authorities have denied any role in Sombath’s disappearance; however, it is widely believed to have been carried out by police or other government-linked actors.