A secretive ruling clique and murky land-grabs spell trouble for a poor country. 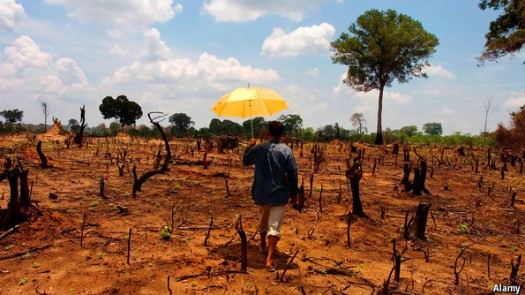 THE Airbus A320 was ordered by Colonel Muammar Qaddafi, but somehow ended up as the prized possession of Lao Airlines. From a window seat flying above Laos a visitor gets a sense of the state’s weaknesses. Deforestation stretches all the way to the Chinese border. It is so recent and so extreme that scientists from Sweden’s Lund university picked Laos as a testing ground for a new method of monitoring economic activity from space. By combining night-time satellite images with land-use data, they can estimate, with surprising accuracy, changes in agricultural and non-agricultural activity. For Laos, it also means monitoring the impact of Chinese and Vietnamese cash from space.

On the ground in the northern province of Oudomxay, most jeeps roaming the deforested valley bear Chinese and Vietnamese number plates. Four of the province’s districts are among the fastest-growing rural economies in the country, according to the researchers in Sweden. (Laos’s obscurantist government publishes little information about anything.) Investment is flowing into agriculture, typically rubber plantations, market gardening and other cash crops, much of it destined for the huge Chinese population to the north. The side-effects include a loss of forests and biodiversity, serious soil erosion and growing numbers of people in this multi-ethnic province being pushed off their land.Chinese firms have secured rubber concessions in the province covering 30,000 hectares (74,000 acres). The idea is that tens of thousands of Chinese workers will eventually be needed to tap the rubber. In the past decade the government has granted land concessions across the country for up to 100 years, often at knock-down prices, to Chinese, Vietnamese and, to a lesser extent, Thai operators. More land is now in the hands of foreigners than is used to grow rice. The fear of one expert in Laos is the emergence of a landless poor.

Not all Chinese influence is welcomed by the government. Recently a deputy prime minister, Somsavat Lengsavad, announced the closure of a Chinese-run casino near the border that had attracted drugs and prostitutes along with gamblers. Yet Mr Lengsavad, ethnically Chinese himself, has his own patronage network built on granting concessions for Chinese-run special economic zones. And he is the point man for one of Asia’s most ambitious projects: a proposed 262-mile (421-km) passenger and freight railway connecting Kunming, in the south-western Chinese province of Yunnan, with Vientiane, the Laotian capital. The $7.2 billion price tag (including interest) is nearly as big as Laos’s entire formal economy. It will take 50,000 workers five years just to lay the tracks. Two-thirds of the route will run through 76 planned tunnels or over bridges.

The collateral for such a huge project lies in the mines of Laos. In other words, the extraction of natural resources in this undeveloped country is about to accelerate. Economic rents already accrue to an oligarchy, for which the railway, one way or another, will prove a bonanza. Among other things the question looms of how wide the corridor accompanying the railway will be. There is speculation about a Chinese road running alongside the track, eventually to the border with Thailand. A man who has seen the blueprint for a planned Chinatown east of Vientiane says that the final stop for the proposed railway is smack in the middle of new living space for over 100,000 Chinese.

At present, a bus is the only way to get down from the mountains of Oudomxay. Monsoon rains play havoc with the 200km stretch of road to Luang Prabang, which served as the royal capital until the Communists, after a long civil war, consolidated their power in 1975. (In Luang Prabang the king’s favourite Citroën car survives, unlike him and his family.) It can then take another ten hours, over rugged terrain, to get to Vientiane.

The capital is on the mighty Mekong river, which forms the border with Thailand. Though it still has a torpid air, Vientiane is growing fast in the hands of a Communist kleptocracy whose members queue up on Saturdays in their big cars to cross the Mekong for a dose of shopping across the border. For many of the remaining 6.6m Laotians, unease and sometimes fear are the predominant emotions.

Last December a well-known democratic activist and advocate of sustainable development, Sombath Somphone, disappeared. At the same time, the government clamped down on foreign NGOs, especially those advocating land rights. Two months ago the American embassy hung a banner from its water tower calling for the return of Mr Somphone. In September the head of the American-based Asia Foundation in Laos was told to pack her bags.

Unlike Myanmar, Laos has never had a Western-educated opposition leader to remind outsiders of the nasty nature of the regime. Indeed, Laos has not even the semblance of an opposition—and certainly no free press. It is a land of few books. Clergymen, artists, editors and schoolchildren undergo ideological study sessions. The trauma of its long civil war and of American carpet-bombing during the Vietnam war is never far away. One-third of the country is still contaminated by unexploded American ordnance. Hundreds of people lose limbs every year to cluster bombs.

In few countries do development agencies have to operate in thinner air than in Laos. In e-mails, foreign residents drop syllables from the names of Politburo members in attempts to outsmart new Chinese surveillance technology. The regime is constantly on guard against foreigners who might be seeking to “change our country through peaceful means”.

It is true that cash from China and Vietnam has helped to double the size of the economy in a decade. Dams have brought electricity to four-fifths of the population. Yet indicators of maternal health are worse than in Cambodia (which attempts a democratic façade), and levels of malnutrition are atrociously high. To make things look not quite as bad, NGO types say, the government deliberately went around feeding children in villages monitored by the UN for the Millennium Development Goals—until it was found out.

Despite all that, says one long-term resident who has worked with them, “five or six” people in the government are open to adopting a more balanced path. They hope to reverse rising inequality, repression and environmental degradation.

A senior government spokesman says, with a hint of regret, that Laos has given concessions on 30% of its land to foreigners. He says he loves his country and his people, but, asked what will happen if Laos continues on the current path, he takes out a pen and writes “Lenin 1917 Revolution”. Why such candour? “Imagine you and me and our sons were in a boat that sprang a leak,” he replies. “Would we jump up and plug the leak? Or would we watch the boat go under?”